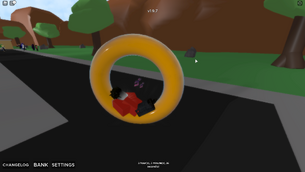 It's unobtainable. You can only get it by trading people who have it.

You could get it if you had Sonic.EXE in the time that Sonic.EXE was obtainable by using Toxic Chemicals on Sonic. After an update in the game, all people that had Sonic.EXE got a Sonic reverted from exe.

This spec has the exact same move-set as regular sonic just a rarity difference and name.

To not get scammed, always check the sonic user to see whether it is reverted or not.

There will most likely not be a data reset

In game, by checking a player, it will say "Sonic; reverted from exe", but when trading a player with reverted, it would just say "Sonic". This is probably due to reverted just being normal Sonic with a name change.

Retrieved from "https://a-bizarre-day-modded.fandom.com/wiki/Sonic_(Reverted)?oldid=21230"
Community content is available under CC-BY-SA unless otherwise noted.