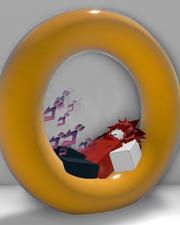 Currently obtainable through using a Pot Platinum's Diary on the Vampire Spec. Has an unobtainable version called "Sonic Reverted" (You would only get this if you obtained Sonic.Exe the old way, Sonic + Toxic Chemicals before it was changed, making this S tier in rarity)

This barrage lasts infinitely. This barrage starts off with extremely pitful damage however when charged for a moment of time will start to gain immeasurable strength and will cap at about 150+ damage per hit. (Using SUPER SONIC or F will pre-charge your barrage making it start with 10~ damage per hit).

You make a heavy punch that does moderate damage with high knockback but no ragdoll, it has a very low cooldown.

Jumping onto this jumping pad randomly selects how high the pad will send you.

You speed up a large amount, this is the fastest obtainable spec/stand in game. It is faster than Made In Heaven. after 30 seconds or so you will lose this speed boost. (This does not pre-charge your barrage)

You become super sonic! You fly and trip whoever comes close. Lasts extremely long and if held infinitely, it was last forever. This is very fast and powerful with about the same speed as "Gotta go fast!".

To do this move you press 3 times and on the fourth spin you will launch forward anyone in its direction shall receive damage. This has a low cooldown and has a large hitbox but can be hard to land it in H.

Sonic.exe: Obtainable through using a hell arrow on sonic (Will not work on Reverted Sonic)

Tip one: Always keep in mind that sonic's durability is very low and should you should not try to contest close range power types such as JSP or Cosmic Luigi

Tip one (continued): Sonic can serve as one of the best hit and run specs in the game even as strong as ulf if used correct; the main strategy is to pummel your enemy with C/spin-dash and R/speedy-hitter slowly chipping in damage, though this fails against blocks from strong stands/specs.

Tip two: RUN utilise the H/F (They do not share the same cooldown) move as much as you can as sonic has amazing regenerative capabilities.

Tip three: Don't play fair. Keep distancing yourself and charge your barrage and keep constant movement. Sonic's barrage is easily counter-able with a strong punch or any rag-dolling moves so strike wisely. Using H to pressure the enemy is a great idea.

Sonic The Hedgehog was released in 1992 and has continued to be one of the most recognised and well known video game icons.

When posing the theme 'Studiopolis' from Sonic Mania.

This is faster than Made in Heaven (Not debatable, it's a fact)

Always check a sonic if you are trying to trade for reverted sonic as there is no physical difference between the two.

A rework of the sonic spec is confirmed.

Retrieved from "https://a-bizarre-day-modded.fandom.com/wiki/Sonic?oldid=21229"
Community content is available under CC-BY-SA unless otherwise noted.